In just seven years, there will be more Americans over age sixty-five than under age fifteen. By 2030 (if nothing changes)
the number of people over sixty-five will double, while the umber of those over eighty will nearly triple.

Researchers, policy-makers, educators, practitioners, families, and older adults are continually coming together to discuss what these trends mean. One thing that is universally agreed upon: The day of looking anew at our elders is here! And researchers and agencies are taking note!  Older adults provide wisdom and strength in many areas, as well as coming together to craft their futures. Who are they?

In May, 2013, the researchers, Eric Klinenberg, Stacy Torres, and Elena Portocolone, prepared a "briefing paper" for the Council on Contemporary Families for Older Americans Month. Here are excerpts of this information to start and/or continue the discussion of why we need and how we can all build strong
personal safety nets as we age. Here are some of their findings, covered as well in an executive summary by Stephanie Coontz, Co-Chair and Director of Research and Public Education Council on Contemporary Families.

It's not just the number of elders in America that is unprecedented: There has also been a revolution in how and  where these elderly live. Today a full third of all older Americans live alone, a figure that rises to 40 percent for those 85 and older. The practice is likely to accelerate with the graying of the baby boom generation, whose first members turned sixty-five two years ago. Why?

Older Americans typically prefer to remain in their own homes, a trend gerontologists call "aging in place." 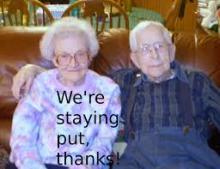 AARP surveyed adults fifty and older and found that 89 percent wanted to age in place. Indeed, those who age alone often say that their sense of dignity and integrity depends on their capacity to maintain their own home. If bad health or economic insecurity forced them to move in with family or, worse, a nursing home, they say, this would be a devastating loss of face as well as privacy. (Movements such as N.E.S.T., PNA Village, and Wider Horizons, all in Seattle, have arisen in response - helping elders and "youngers" come together for mutual support within community)
Living alone need not equal social isolation. Life course transitions such as retirement provide people with more free time to socialize, and social participation and volunteering actually increases with age. Contrary to stereotypes, older people who live alone are more likely than their married counterparts to spend time with friends and neighbors.

Elders today maintain their physical capabilities longer than ever, and the cognitive and physiological declines that people experience as they grow older are often overstated. Disability rates have been falling. A 2009 Pew Research Center survey found that the percentage of older adults who reported actually dealing with issues associated with old age was much lower than those younger expected. Memory loss, serious illness, or lack of sexual activity simply weren't the problems they were expected to be. Phew!

Still, living alone ("aging in place") isn't without its troubles. Living alone can be a financial strain for elders who must meet maintenance expenses, property taxes and, often, mortgages, on fixed incomes. Medicare does not currently reimburse long-term visits of home care aides. Nor does it cover hearing aids, dental care and dentures, eye glasses, or routine foot care. An individual who has less than $2,000 in savings can have a public home care aide provided by the government, but anyone with more than this has to spend down all their assets (with the exception of their home, their car, and $2,000 in the bank) to become eligible for such assistance.

The vulnerabilities of older Americans differ by gender, race and ethnicity. Women are more likely to age alone: 37 percent of American women sixty-five and older live alone, compared to 19 percent of men the same age. Almost half (47 percent) of women seventy-five and older live alone. Black women become widows in greater numbers and at younger ages because on average black men die earlier than white men.

Are we ready to accommodate the needs of future Americans aging alone?

Not really! Though we're getting closer by convening conferences such as Building Elder Friendly Futures, convening older adults and asking them to design their own preferred futures, and opening experimental successes like

Alzheimers Cafes, there's much to be done. Although the private sector has ample capacity to provide long-term home caregivers, meal deliveries, and other such services for affluent elders who go solo, and village models that engage volunteers and wider safety nets, the monthly checks from Social Security and the Supplemental Security Income program come nowhere near covering such expenses for those without substantial other sources of income.

Today these economically vulnerable Americans represent the majority of those aging alone. With the numbers of older solo dwellers increasing, providing more care and support for those who choose or are obliged to live alone has and will continue to be a major policy challenge. Looking widely for new and vibrant models, creating individual and community safety net models and building on successes is where our hope lies. As future expands, we've plenty of time to try!