It's remarkable how powerful it is to be aware of the choices you make.

Whether it's looking at the stress levels of bosses, or examining the results of giving women with cancer more choices in their types of treatment, or seeing direct health benefits from providing senior citizens with choices, there's a new commonality - having choices, and intentionally exercising these choices, decreases stress and leads toward healthier lives. 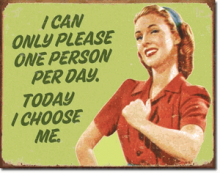 In field research with older adults in a nursing home setting, Langer and Rodin, gave one group the freedom to make choices and the responsibility of caring for a plant rather than having decisions made and the plant taken care of for them by the staff, as was the case for a second group. Questionnaire ratings and behavioral measures showed a significant improvement for the choice group over the non-choice group on alertness, active participation, and a general sense of well-being. They participated in more activities, got fewer colds, and lived longer!

It seems almost silly that a group, given the choice of whether they wanted to water their own plants, would have wellness benefits, as opposed to a group that had their plants watered for them - but it's true. As we've learned lately, the power of choice seems to have a great effect on our lives.

Researchers at the University at Buffalo conducted a study of women between the time of breast cancer diagnosis and surgery, offering an in-the-moment snapshot of how women arrived at their decisions. A diagnosis of breast cancer will affect one in every eight women in the United States, according to the American Cancer Society, causing them to have to decide quickly about treatment. A friend of ours reminds us frequently, "Let's not worship at the altar of false urgency." Especially with cancers, though, we can panic and lose track of the fact that we do have a choice of deciding quickly ... or of choosing not to ... even if our choice is, perhaps, against medical advice. Still, this is a choice, and in choice there is power!

In the study published in the September issue of Oncology Nursing Forum, women who were diagnosed with early-stage breast cancer were interviewed during the period just after surgical consultation and before surgery. According to Robin Lally, assistant professor of nursing at the University at Buffalo School of Nursing, when women were presented with options as to treatment, they saw it as a positive prognostic indicator.

"The women in the study valued receiving options, even if they had one already in mind, and though they may not have seen themselves as a person who is typically good at making decisions, they drew confidence from the support provided to them by their health care team while making the decision." Research is continuing to see whether their optimism is positively linked to improved outcomes.

At Harvard University, new research - the largest of its kind - supports the idea that options greatly affects business. The study showed that business leaders suffer from less stress than people in less powerful positions. Bosses are less stressed than their workers.

While the leaders were more likely to be male and wealthier, who exercised more, consumed more caffeine, smoked less and woke up earlier (6 a.m. on average versus 7:30 a.m. for non-leaders), the research showed that having a sense of control, options in decision-making and a say in what's going on "would buffer against stress," said Gary Sherman, a postdoctoral fellow at Harvard University and the study's lead author.

Richard Elliot Wener, professor of environmental psychology at Polytechnic Institute of New York University, agreed. He has studied stress in commuters and found that they become more anxious as they lose control and the ability to predict what's going to happen.

In a domestic abuse program, children of warring partners are helped to make plans for what they'll do if their homes become unsafe: call police? run to a neighbor? hide in a closet? The children with a plan show less stress. They have come up with a plan - and that equates with power. Because they have CHOSEN! they have less stress ... how about YOU?