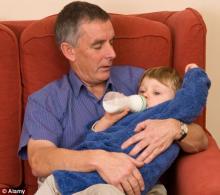 As demographic changes take place in the world, we wondered how this might affect people's Personal Safety Nets (PSNs). Two piece of recent research from our friends a Pew Research caught our eye. Both present new and interesting challenges to individuals and families or communities seeking to build or enhance their personal safety networks.

Dads At Home with the Kids:

The number of fathers who are at home with their children for any reason has nearly doubled since 1989. It reached its highest point: 2.2 million, in 2010, just after the official end of the 2007 recession. Since that time the number has fallen slightly, driven mainly by declines in unemployment.

Dads self-report feeling isolated, having difficulty connecting with a wider range of others who understand their questions, concerns and needs.

While most stay-at-home parents are still mothers, fathers represent a growing share of all at-home parents - And yet, at 16% of parents staying home with children, primary care dad is hardly alone. Interestingly, while roughly a quarter of these stay-at-home fathers (23%) report that they are home mainly because they cannot find a job. Nearly as many (21%) say the main reason they are home is that they want care for their home or family. This represents a fourfold increase from 1989, when only 5% of stay-at-home fathers said they were home primarily to care for family.

A rise in the number of stay-at-home fathers is occurring side by side with another important parenting trend of the past half century: a rising share of fathers who don't live with their children at all. About 16% of fathers with young children live apart from all of their children.

The dramatic rise in the share of never-married adults and the emerging gender gap are related to a variety of factors. Adults are marrying later in life, and the shares of adults cohabiting and raising children outside of marriage have increased significantly. The median age at first marriage is now 27 for women and 29 for men, up from 20 for women and 23 for men in 1960. About a quarter (24%) of never-married young adults ages 25 to 34 are living with a partner.

And what about lesbian, gay, bisexual and transgender (LGBT) adults? Survey findings showed 3.5% of adults self-identified as gay, lesbian or bisexual, and in households identified as LGBT, over 80% are cohabiting partners, while due to the fact that only 19 states recognize marriage between same-sex partners (as of this research), less than 16% are married partners.