Since most Americans obtain health insurance coverage through their employer, we thought it would be interesting to look at how well popular wellness programs really work.

For various reasons, employers have found it in their best interest to try to promote a healthy, productive workforce in order to moderate health care spending. The way to this goal is often through a company wellness program. The goal is usually to balance the organization's program costs with health results leading to large dollar savings for organizations and employers. In fact, today, wellness plans are often promoted as saving companies $3 or more for every dollar invested. Do you work in a company with a wellness program? Does this sound familiar?

The American Medical Association's Chicago headquarters, started an employee wellness program in 2007.  Now more of the 1,000 employees take the stairs. The company's cafeteria has expanded its nutrition labels. TVs in the building highlight wellness events. Employees can participate in daily dance, yoga, tai-chi, and other fitness classes, guest speakers appear regularly showing  how to turn fresh fruits and vegetables into delicious meals. A biometric testing program measures employees' cholesterol and glucose levels. But does it get the results that were intended? We were unable to get exact statistics.

In fact, while the percentage of firms of any size offering at least one wellness program grew from 58 percent in 2009 to 77 percent in 2013, results are inconclusive. A recent survey by the Kaiser Family Foundation and Health Research & Educational Trust raises questions  about the effectiveness of these wellness programs. What aspects of these programs work, for whom, and for how long? How successful are they for employers? What questions would you have about this?

One recent review of 33 workplace wellness programs in place since 2000 found that programs generally focused on the basics of healthy living, including increasing physical activity, eating well, and losing weight. 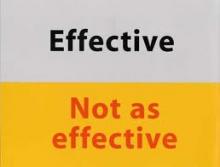 Workplace smoking cessation programs had higher quit rates compared to non-participating groups. Those programs that integrating the program with occupational health lessons attracted more participants and resulted in quit rates twice as high as those for workers who participated in smoking cessation programs alone. Was it because they did it together? Overall, the findings, in regard to effectiveness of wellness programs in terms of improving health outcomes and behaviors, are inconsistent, with positive evidence for programs focused on smoking cessation, but insufficient or negative evidence for those focused on physical activity, eating habits, and biometric measures. Why?

Programs focusing on physical activity have such varied components that it's difficult to get clear evidence of their effectiveness. For example, over a two year period, one set of researchers found no significant difference in levels of physical activity for employees at schools with wellness programs compared to those at schools without programs. However,  in another study providing fitness centers was sufficient to produce some change in sedentary employees, but those who also received group-counseling with the exercise training consistently had greater improvements in physical activity and energy expenditure overall. They did it together!

Many wellness programs focus on improving biometrics - such as weight, blood pressure and cholesterol levels - and aim to develop healthy eating habits, with no decrease in hospital admissions or emergency room visits among participants. Still,  RAND found "Well-executed programs appear to improve employee health meaningfully," the California Health Benefits Review Program, which advises the state's legislature, found that though employees' blood pressure, blood sugar or cholesterol did not improve by participating in a corporate wellness plan, workers lost about 1 pound annually for three years. I know I'd like to lose, rather than gain this ... how about you?

What about the effectiveness of wellness programs with regard to their return on dollars spent by employers? RAND found that fewer than half of companies took the time to calculate whether wellness programs saved them money. If they did, the numbers might have startled them. The study concluded that wellness programs did not significantly reduce employer health costs. Why? Because health screenings (often part of the wellness program) generally promote more doctor visits, prescription medications or further tests. While this might benefit workers' health, which might pay off with longer terms. In the short run, it doesn't necessarily save money. And some employers pass on the cost of these programs to workers by raising their insurance premiums. So, if money saved is the metric, then no - these programs don't work.

And what about the doctors?  While it's widely known that physically active people are healthier overall than people who are sedentary, and that active people are less likely to gain excess weight thus having a smaller chance of developing chronic conditions such as high blood pressure, diabetes and heart disease, doctors have not always gotten that message across to patients. And they don't seem to be very good at taking the advice themselves, either!

Although U.S. doctors are giving their adult patients more advice on exercise than they used to as we pointed out in our August newsletter, only about a third of all doctor-patient encounters in 2010 included such counseling, according to a report published by researchers at the CDC.

How do you think your physician would score?

Importantly, physically inactive doctors are more likely to sidestep the subject of exercise than are fit physicians, according to an international study published in the British Journal of Sports Medicine in 2008. The researchers found that physically active doctors were more likely to encourage and motivate patients to do the same. And a new study from Truven Health Analytics, reports that hospital employees (including doctors) are less healthy than the general workforce and cost more in health care spending.

As reported in a recent article in the Georgia Health News, the lesson for the all of us is when it comes to wellness programs, "when doctors practice it, they're better at preaching it." So, bring the subject up with your doctor, and see if they're practicing what they need to be preaching.